It is a worldwide controversy, and is a popular topic discussed among people. Animal testing should only be done when it is helping the wellbeing of an animal. It should never be done on an animal just for fun, or to purposely hurt the animal. Only species that are not endangered should be used for testing.

“I can definitely see both sides of it,” says Matthew Rach, a science teacher at Quakertown High school. “There are pluses and minuses to it. When you start to personify animals, you can feel their pain, and they have nervous systems which definitely has to be taken account for. However, I can also see the benefit for the greater good of humanity.”

According to PETA, a non profit organization dedicating itself to the treatment of animals states, “ Each year, more than 100 million animals- including mice, rats, frogs, dogs, cats, rabbits, hamsters, guinea pigs, monkeys, fish, and birds- are killed in the U.S. laboratories for biology lessons, medical training, curiosity driven experimentation, and chemical, drug, food, and cosmetics testing.”

Check out this article to learn more about the deaths of animals used in testing, (https://www.peta.org.uk/blog/life-in-an-animal-testing-laboratory-an-unused-animals-experience/)

Innocent creatures, who possess a life, are being killed every day due to experiments, some having illogical reasoning. When being harmed when experimented, animals rights are violated. 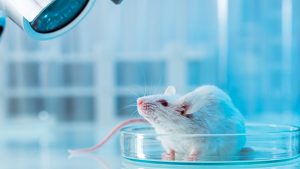 “There should not be this many innocent animals dying because of something like this,” Gabrielle Kishbaugh says, an animal lover and student at Quakertown High school. “It is simply not right.”

Tom Regan, a philosophy professor at North Carolina State University, states: “Animals have a basic moral right to respectful treatment. . . .This inherent value is not respected when animals are reduced to being mere tools in a scientific experiment.”

Animals are more similar to humans than many think. They think, feel, behave, and feel pain. Animals feel pain in many of the same ways that humans do; in fact, their reactions to pain are virtually identical. For example, both animals and humans scream, when enduring excessive pain.

“Animals are like us in the sense that they feel and think,” says Kishbaugh. “They shouldn’t have to experience pain when going under experiments when there are other alternatives.”

On the other hand, many people believe that animal testing is justified because the animals are used/sacrificed to make sure products are safe for human use and consumption. The problem with this argument is that animals’ safety, well-being, and quality of life is usually not taken into consideration.

Sheila Silcock, a research consultant for the RSPCA, states, “Animals may themselves be the beneficiaries of animal experiments. But the value we place on the quality of their lives is determined by their perceived value to humans”

Another problem with this argument is that there are substantial alternatives to using animals, when it comes to testing.  These alternatives to animal testing include sophisticated tests using human cells and tissues, studies where humans volunteer, and advanced computer-modeling techniques.

According to PETA, these methods, and other non-animal methods are usually more beneficial.

“In theory, non-animal tests could be much cheaper and much faster,” says Warren Casey, the director of the U.S. National Toxicology Program’s Interagency Center for the Evaluation of Alternative Toxicological Methods, which analyzes alternatives to animal use for chemical- safety testing.

To find out more about how these alternatives are developed, read this article,

Animals lives have value, and their lives should not be merely thrown away for an experiment.