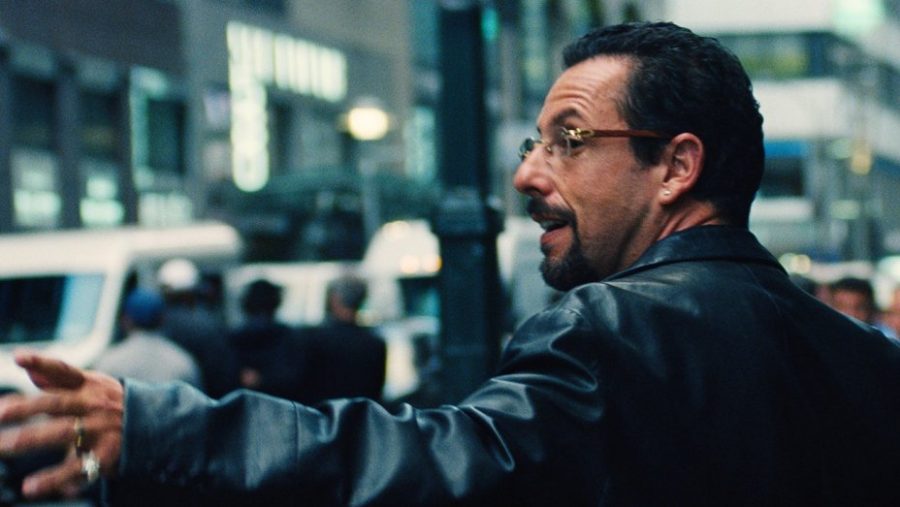 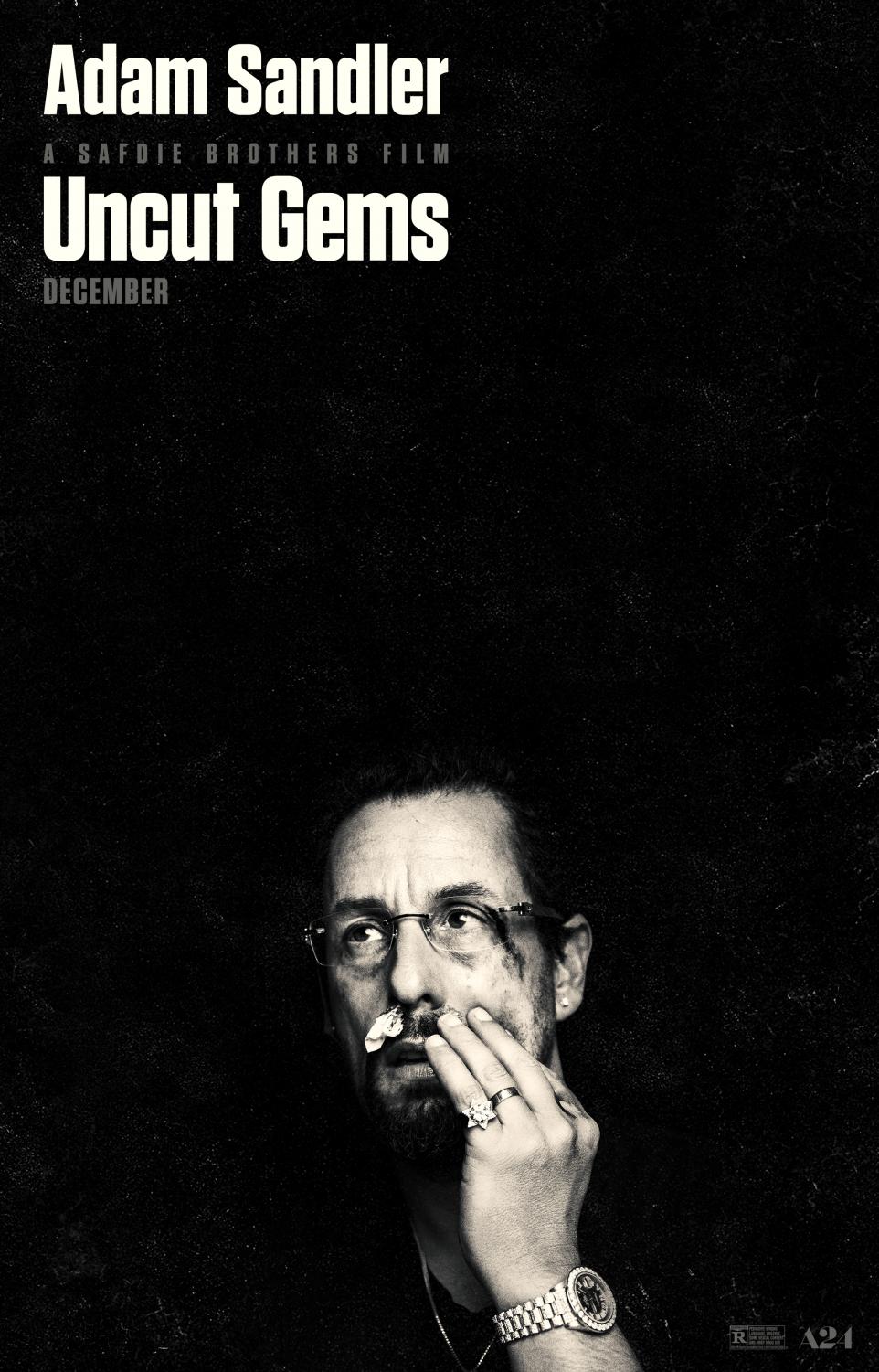 Like a nosebleed making you lightheaded that refuses to stop, like realizing you were late to a life or death meeting, like waking up to an unfamiliar ceiling; Benny and Josh Safdie’s Uncut Gems is the best heart attack one could ever have at the cinema. Armed with the anxious tone of a Parkinson’s-riddled body, a lead actor who is arguably one of the greatest ever (given he takes a serious role rather than a cash-grab) and a penchant for pumping blood through its viewers’ veins, there is no doubt that the term “thriller” has just been redefined.

Uncut Gems follows the charismatic and dubiously trustworthy Howard Ratner, (Adam Sandler) a Jewish American jeweler in 2012 New York City whose primary lust for life is found in gambling, betting, and risking everything for his own thrills, despite it clearly estranging his family, specifically his wife Dinah (Idina Menzel) who plans to divorce him after Passover. This risk taking culminates in front of his very eyes when he lends an exceedingly precious black opal to legendary Boston Celtics player Kevin Garnett (played by himself) who seems to gain an unbelievable amount of talent with it in his reach while playing. When Howard expects it back so he can sell it properly to pay off his debts to loan shark and brother-in-law Arno (Eric Bogosian), and it does not come back to him in a timely fashion, Howard enters a spiral of more and more risky decisions to hope that he can get out of the situation on top.

It is really quite impossible to say that Adam Sandler is not far and away the best factor in why this movie works so damn well. He is an absolute beast in every form, and his performance followed by Darius Khondji’s rushing cinematography and accompanied by a score by none other than Daniel Lopatin (using the Oneohtrix Point Never moniker) is really the work of magic. Sandler follows the same path as Jim Carrey in that, sure, he’s known for his comedic work and generally does not do much else of note, but excels so hard in his dramatic roles that it can actually be easy to forget that this is the same man who starred in ‘worst movie ever’ list topper Jack & Jill and the similarly abhorrent Pixels. No exaggeration about that, either; Howard Ratner as a character in this film feels more like the representative of a real human being than the very real Kevin Garnett who co-stars as himself. Just as Carrey eclipsed his time as Ace Ventura with The Truman Show and Eternal Sunshine of the Spotless Mind, Sandler here reminds viewers of the period of time when everyone realized that yes, he is actually a fantastic performer, as viewable in Punch-Drunk Love and Funny People. Hell, if you happen to actually like some of Sandler’s comedic work, you might even compare him to the late Robin Williams in terms of sheer talent and versatility. 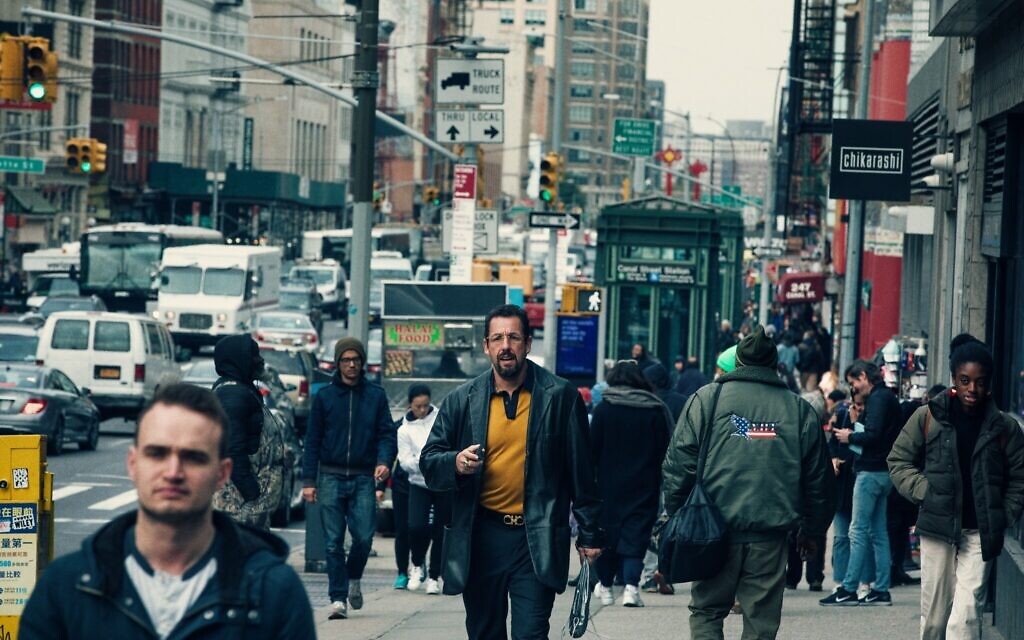 Of course, this is hardly even touching on the ambitious direction – befitting of the film’s themes of avarice and audacity – that the Safdie Brothers apply to their (and Ronald Bronstein’s) expressive script. The intricately woven plots, layered above a tone of utter mayhem and frenzy seems to cement them as auteurs of their craft, following up on a similarly unique, anxious thriller in Good Time. The fact that this movie takes place in 2012 coincidentally lends itself to the fact that this narrative will make viewers both casual and dedicated feel as though the world around them is collapsing and they have no damn clue what the best course of action is… just that the course they are on is going to end in carnage and armageddon like the Mayans once implied. But no, this time it was not the Mayans, far from it. In fact, they are seeing into the future more than the ancients ever could, because they can see that rather it was the disastrous decisions of one man who just wanted the thrill of the biggest hit he can imagine, the biggest hit he will ever see, and it won’t end in the whole world dying, but the unnecessary suffering caused by every horrific little domino after the next, tumbling into the shape of the chemical structure of serotonin, like those tattoos people get when they are proud of their continuing fight with an anxiety disorder. That tattoo comes to their mind as they realize that there is no such good way to escape this situation, and their mind flares up inside again. They get filled with nothing but regret that they ever got it, that they made it this far. That feeling of unknowing, of chaos, of havoc, turmoil, tumult, bedlam, and outright fear for the future is one of the best cinematic experiences of the year. There is no better nervous breakdown viewers could ever experience upon the silver screen.