Once Upon A Time in Hollywood Review 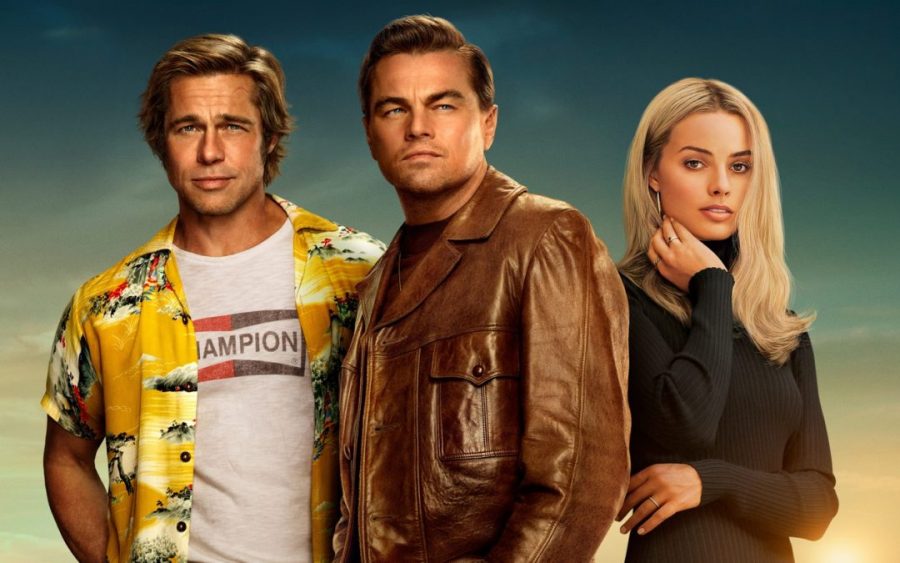 Once Upon A Time in Hollywood, Quentin Tarantino’s penultimate film, is a masterpiece of movie aesthetic and setting, perfectly capturing 1969 Los Angeles and the era’s transformations in the cinema industry. The 2019 summer release features Leonardo DiCaprio, Brad Pitt, and Margot Robbie as vastly different personalities throughout the tumultuous 1960s. The comedy-drama, in no shortage of tension and stress, leans more towards humor and lightheartedness in an era discernible for its social change and general anxiety.

Tarantino develops the lives of the three main characters, Rick Dalton (DiCaprio), Cliff Booth (Pitt), and Sharon Tate (Robbie), as they trek through the thriving cinematic industry. Rick and Cliff, connected through their early days as the lead and stunt double respectively on a 1950’s western show named Bounty Law, remain best friends nearly a decade later, tackling the changes in their era–and society as a whole–together. Rick, in particular, deals with the most conflict of the three, acknowledging his acting career to be faulting, struggling to find roles to reinvigorate his passion and success. Cliff, struggling as well and understanding his income comes solely from stunt double roles for Rick, helps the lead actor revive his self-confidence and acts as a manager of sorts. Tate’s story, the only true tale of the three, covers her marriage with Roman Polanski and her hopes to form a family and continue her rise to acting stardom. The Manson Family appears consistently throughout the entire film, with each of the three characters interacting with the radical hippie group at one point or another. Yet, he does in Inglorious Basterds, Tarantino–the long-time director–rewrites history in an unprecedented turn from the brutal killing of Tate and her houseguests in late 1969.

Brad Pitt’s performance steals the show, occupying audiences’ attention throughout every scene he appears in. His rugged personality, symbolizing the common man in a world of chaos in Hollywood, is a breath of fresh air within the film’s other performances. Pitt’s character, Cliff Booth, is a man who can work with his hands and deal with the nitty-gritty of Hollywood, whether that be as a stuntman, repairman, personal driver, fighter, or–most importantly–a reliable best friend. His interplay with DiCaprio’s Rick Dalton, as well as his interactions with the industry and the Manson Family, makes Booth–in the simplest terms–the coolest man in town. His carefree attitude showcases that, even in the face of pure danger, fate always finds a way and things will always end up the way they are supposed to. Although taking similar roles as the “care-free” character in other movies, the long-time actor solidifies his status as the best in the role with his superb performance in Tarantino’s ninth film.

Tarantino, at his best in this film when showcasing the love for the era of his childhood, creates one of the most beautiful movie settings I’ve seen throughout my years of watching movies. The music, the clothes, the set design, the cultural references, all of it. Audiences truly feel as though they woke up in 1969 Los Angeles. Although a bit tedious at some points, Tarantino makes up for the slower pacing with his intense appreciation for the period and attention to detail. Few movies make a mark in my conscience like this love letter to 1969 Los Angeles, whether it be through the performances, the cinematography, or the aesthetic and setting, making this an exceptional film and certainly one to remember for years to come.

The film received the following nominations/awards: won the Golden Globe for Best Screenplay (Tarantino), won Best Film at the Cannes Film Festival, won the Golden Globe Award for Best Supporting Actor in a Comedy/Drama (Pitt), placed in the American Film Institute’s Top 10 Films of 2019, nominated for a Screen Actors Guild Award for Outstanding Performance by an Ensemble in a Motion Picture, and nominated for the Grammys Best Compilation Soundtrack Album for Visual Media.

I recommend this movie for the simple fact that the setting and attention to detail for the era are worth the price of admission, let alone the fantastic performances of DiCaprio, Pitt, and Robbie. The pacing may take away from the film for some audiences, but the appreciation distracts you and allows you to appreciate a different, more hopeful era in American history. I recommend this to Tarantino commoners, history and cinema buffs, and most of all, those that lived through the era that can attest to the beauty and accuracy of the period piece. Once Upon a Time in Hollywood is a must-watch from start to finish, and its performances and aesthetic will live on as some of Tarantino’s best.