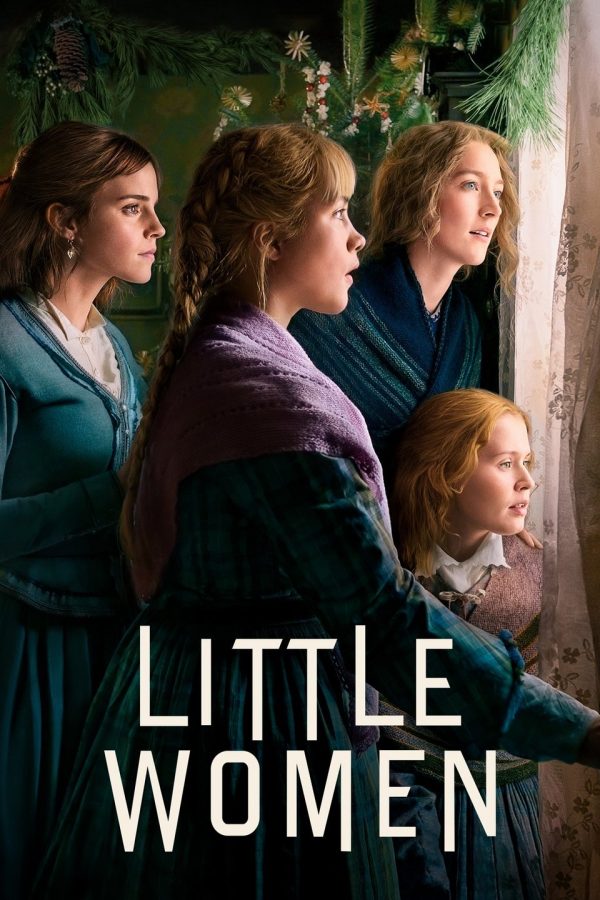 “Little Women” (2019) is a beautifully constructed movie about family, feminism and moving onto the world alone. The movie starts off with Jo March, who is played by Saoirse Ronan, sitting in front of a publisher. She is speaking about how her “friend”wrote this story and she needs to sell it for money. The publisher buys it, but when he asks for the name of the author, she says that she would rather not have the name on it. The story of “Little Women” then begins.

The new movie rendition of the original book, “Little Women” by Louisa May Alcott, but directed by Greta Gerwig, shows a family through their life and it definitely pulls on the heartstrings. Greta Gerwig often uses the same actors and actresses in many of her movies. The movie stars Saoirse Ronan as Jo March, Timothée Chalamet as Lorie, Emma Watson as Meg March, Florence Pugh as Amy March and Eliza Scanlen as Beth March.

The movie follows the March family living during the war without their father. It shows the family being poor and not being able to live like the other “girls” and shows them have joy over the smallest things, like a letter from their dad. In the letters from their dad, he speaks about the war and him missing his “Little Women.” The movie is filled with heartache and shows an accurate description of how some people lived their life in that time period. The movie also jumps from the past (when they lived all together), and to the present (when they are all moved out of the house).

The movie mostly follows Jo who is an aspiring writer who all she wants is to be remembered by the world after she dies. The movie jumps back and forth showing her being young and still learning, then to her running off to New York and working at a school. In the flash back it shows Lorie (played by Timothée Chalamet) slowly fall in love with her, but little does he know, she wants to focus on her writing and does not aspire to get married.

In the present time it shows a professor at the school she works at, also slowly fall in love with her. In both time periods, she is completely oblivious to it and she ignores every sign. The movie shows how Jo is a free-spirited feminist that does not want to follow the rules of how a women should live their life. It also follows the rest of her sisters who are not as willing to give up the normal life style.

Meg March, played by Emma Watson, wants to be an actress and have lots of money, but she ends up staying in her hometown and marrying a friend of Lorie. It also follows Amy March, played by Florence Pugh, who is a very talented painter and aspires to be famous and live in Paris, in her adult life though, she ends up being with a rich man and she can paint all the time, but she being the most unhappy out of them all. By the end of the movie her and Lorie actually end up falling in love and marrying. And the last sister, Beth March played by Eliza Scanlen, wanted to be a piano player. She was an amazing pianist but her life is cut short by the scarlet fever out brake.

Jo in the end of the movie is shown so heartbroken over her sister’s death, which she made into motivation to finally write her novel. She stays up all night and works for weeks to finish. She brings the book to the publishers office and this time she makes sure that SHE owns her own book and she has her own name on it. The book is about her life and hardships as a poor woman living with her three other siblings.

The movie ends with Jo standing outside of a publishers office watching her book being printed. She gets handed her first printed book and the screen turns black.

The movie in my opinion has only one fault, which is how it is slightly confusing when it jumps back and forth between years. The only way that really helped distinguish what year it was was their hair, and they changed the lighting slightly.

Overall I think that “Little Women was an amazing movie that everyone should definitely see. Its eventful, sad, happy, and it shows how important family and independence is.

Here are some additional links about the new movie “Little Women.”