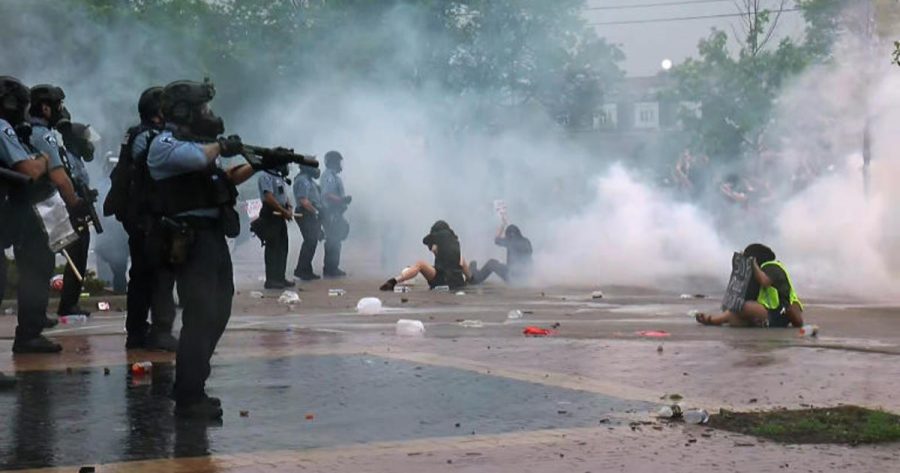 Over these last several months, this country has turned at crossroads between what is just and what is unjust, after a cycle of discriminatory murders.

On May 25, three Minneapolis police officers forcefully murdered George Floyd, a 46-year old unarmed black man, when officer Chauvin pinned his knee on Floyd’s neck for 8 minutes and 15 seconds. This event induced fury among the American people and catalyzed a series of protests all over the country.

To date, the police have arrested over 14,000 protesters, leaving thousands injured and at least 20 deaths within only the first two weeks of protesting.

Even during these unprecedented times with COVID, people of all races and social statuses have gathered together to use their voice and send a message that enough is enough. However, the fact that the very problem they’re protesting against- police brutality against innocents- is being done to them in the process, only makes matters worse.

With an authority figure who is encouraging the use of police forces to end the protests, rather than listen to the people, it makes it even more difficult for change to occur. To quote President Trump’s exact words, “I have strongly recommended to every governor to deploy the National Guard in sufficient numbers, that we dominate the streets. Mayors and governors must establish an overwhelming law enforcement presence.” In other terms, Trump is disregarding first amendment rights and is implying for the police to go to any length to rid demonstrators, as he even offers the military as a next resort.

Initially, the President’s reasoning for deploying forces amongst demonstrators was due to how out of control many people were getting. Out of anger, people started resorting to violence and invading the privacy of other civilians by looting and rioting. Some even took advantage of the protests by using it as an opportunity to steal from stores, instead of what it was really meant for. While all of this does offer a valid reason to involve authorities for the protection of other citizens, it does not excuse the assaults against peaceful protesters, which is where the majority of people are being harmed. According to the U.S. Crisis Monitor, nearly 95% of nationwide protests have been peaceful, leaving 5% entailing violence.

Camera footage as well as cell phone videos serve as evidence for the abuse of power against civilians. Unarmed protesters, as young as fifteen, are being beaten, sideswiped with police car doors, pepper-sprayed, tear-gassed, and run over with cop vehicles.

Intel from The Guardian reveals a series of those misfortunes caught on tape, spanning from locations in the west coast all the way to the east coast. To list a few of these calamities:

In California, an officer shot and killed a twenty-two year old male who was on his knees with his hands up. The police department still has not granted the victim’s family access to all videotapes displaying the situation, most likely because there wasn’t any hard evidence to justify the boy’s death.

In Austin, Texas, police officers “accidentally” shot a twenty year old protester in the head while aiming for someone else, and continued to shoot, striking the volunteers carrying his body.

In Fort Lauderdale, Florida, officers shot a nonviolent protester in the head with rubber bullets, leaving her in pain and covered in blood.

In Kansas City, Missouri, the police raided a sidewalk with peaceful protesters, yelling at them while using pepper spray.

In Buffalo, New York, a National Public Radio Station aired a video of officers dressed in riot gear striking a 75-year old man to the ground and leaving him there unconscious and bloody.

In Atlanta, Georgia, a group of officers tased two students after yanking them out of their car.

Now, many of the officers involved in these violent episodes have been getting punished by their department through suspensions and termination of employment; however, that is only because videotapes from cameras and cellphones have gone viral, serving as hard evidence.

According to the UN Basic Principles on the Use of Force and Firearms by Law Enforcement Officials, “police officers should only ever use lethal force as a last resort. This means when such force is strictly necessary to protect themselves or others from the imminent threat of death or serious injury, and only when other options for de-escalation are insufficient.”

Evidently, all of these cases do not meet this criteria, as some officers are starting to become careless and lose sight of their true duty- to protect the people. Instead, innocent citizens are being harmed, including not just protesters, but medical personnel and journalists as well. Some officers seem to be unapologetic about their use of excessive force as one Seattle trooper stated, “don’t kill ‘em, but hit ‘em hard.”

The majority of protesters have been part of generation-Z, which incorporates five to 24 year olds. This includes young high school and college students, as many within the Quakertown Community have too played a role in these events.

One student, in particular, even witnessed first-hand the unnecessary actions by police forces during a nonviolent demonstration. To quote Angy Nunez’s experience, “during the peaceful protest in Philadelphia, and mind you it was peaceful up until the national guard started throwing tear gas bombs into the crowds to try to disperse them, we got tear gassed. We witnessed people who got pepper sprayed as well as being arrested.” Angy is a person who strongly believes that citizens should be guaranteed the right to practice freedom of speech and expression, so it was upsetting for her to see authorities interfering with those rights.

Due to the greater amount of violent protests over nonviolent ones being shown on the news, “protesting” has begun to receive a more negative connotation. Here is what Devin Tangradi, another student in our community, had to say about this: “When I mention protesting to people, especially family members, who don’t agree with where I stand, they often immediately mention the violence. I think it’s interesting that people question me most about the violence when I had never actually encountered any.”

Point of the matter is that there has been a substantially larger number of peaceful demonstrations than ones full of chaos where police forces have been committing gratuitous acts against the people and getting away with it. This is a worldwide issue and seeing how the majority of protesters have been young adults, the future of America, it is up to them to know their rights and keep using their voices to remind authorities what their true job is.