The NBA offseason is usually much more active than the other NFL, NHL, and MLBs. The 75th NBA offseason was no different despite the odd structure. Trades, the NBA draft, and the Ben Simmons drama still helped to form a crazy NBA offseason despite the 3 main title contenders staying quiet. 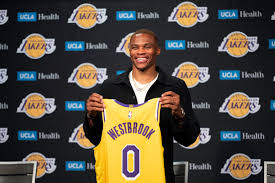 The most news-breaking move of the NBA offseason was future Hall of Fame point guard and former MVP Russell Westbrook being traded to the Lakers to join Lebron James and Anthony Davis. Westbrook, 33,  is coming off of a 1-year stint with the Washington Wizards. The superstar PG averaged 22.2 points per game, 11.5 rebounds per game, and 11.7 assists per game. It was another season averaging a triple-double for Westbrook, however, it was not enough to make the All-Star team.

Westbrook had a great season statistically last year but many fans believe this was a bad move for the Lakers. Westbrook is not a good jump shooter, he shot 31.5% from 3 point range last season, and just 43.9% on field goals. Both of these numbers are below league average by a considerable margin. On a team with many great players in the paint (Lebron, Anthony Davis, Deandre Jordan, Dwight Howard), the Lakers need someone who could space out and shoot the ball. The 2016 NBA MVP just can’t do that, he needs the ball in his hands to be productive and can’t shoot. There’s no doubt that Westbrook is a good player, it’s just a bad fit with the Lakers.

The Lakers gave up PF/C Montrezl Harrell, SF/PF Kyle Kuzma, SG/SF Kentavious Caldwell-Pope, and picked 22 of the 2021 NBA draft for Westbrook. They didn’t give up much, as it seemed like Harrell and Kuzma were on their way out in the offseason one way or the other. LA’s main issue is Westbrook’s contract, he’s due $41 million dollars for the next 2 seasons. Quakertown High School student and Lebron James bandwagon said this about the trade, “I think it was a dumb move by the Lakers. They could have traded less for Buddy Hield and they could’ve used him a lot this season for spacing. Buddy is also a younger player who has been wanting to play in a winning environment which is what the Lakers claim themselves to be.” The Westbrook deal is just one of a few major trades throughout the offseason.

The NBA draft: The 2021 NBA draft took place on July 29th, 2021, and was held in Brooklyn. Oklahoma State Guard Cade Cunningham was the consensus #1 overall pick to Detroit, Jalen Green and Evan Mobley were the 2nd and 3rd best talents according to most scouts and analysts.
The top 10 picks:

The Title Contenders
The league’s reigning champions, the Milwaukee Bucks, had a dormant offseason. They lost 2 contributors (G Bryn Forbes to the Spurs and PF/C P.J. Tucker to the Heat). Milwaukee traded for G Grayson Allen to fill the void that Forbes left – a bench shooter. It will be interesting to see how their defense will be without hard-nosed veteran PF/C P.J. Tucker.

The Brooklyn Nets, 2022, NBA title favorite, also had a very sleepy offseason. They traded sharpshooting wing Landry Shamet to the Phoenix Suns and lost PG/SG Spencer Dinwiddie to the Washington Wizards in a sign and trade. Brooklyn drafted SG/SF Cameron Thomas out of LSU with the 27th overall pick. Star PG Kyrie Irving was suspended from the team indefinitely for refusing to get the COVID-19 vaccine. The vaccine mandate for New York City requires Irving to be vaccinated to play for Brooklyn, and Kyrie has been openly anti-vax due to religious beliefs.

The reigning Western Conference Champion Phoenix Suns had a boring – yet important offseason. They were able to re-sign All-Star PG Chris Paul, who was a huge contributor to their finals run as the 2nd best player on the team. The future Hall of Famer will be entering his age 36 season, as the Suns prepare to attempt another NBA finals run. Phoenix also brought backbench PG Cameron Payne, who played the best professional basketball of his life throughout the 2021 playoffs. Payne averaged 9 points per game throughout the playoffs, including a 29 point outburst in game 2 of the Western Conference Finals.
The Ben Simmons Issue
Most of the 2021 NBA offseason talk was centered around the 76ers. The Sixers were coming off of an awful win-or-go-home game 7 at home against the Atlanta Hawks. Fans were furious with Ben Simmons’ play. Simmons was getting hammered by the media. All-NBA center and teammate of Simmons threw Ben under the bus after the loss. Doc Rivers said he “didn’t know” if Ben could lead a championship team after defending his play all season. This led to Ben Simmons requesting a trade out of Philadelphia. Daryl Morey, 76ers president of basketball operations, turned down multiple offers for Ben in the offseason. He wants a superstar for Ben Simmons, while teams are reluctant to give up a role player. His reluctance to trade Ben Simmons has led to loads of drama within the Sixers organization.  A report from Jason Dumas late in the Summer said that Ben “preferred a California team”, which is bad news for the Sixers as only 1 of the 4 California teams is a fit for a Simmons trade. 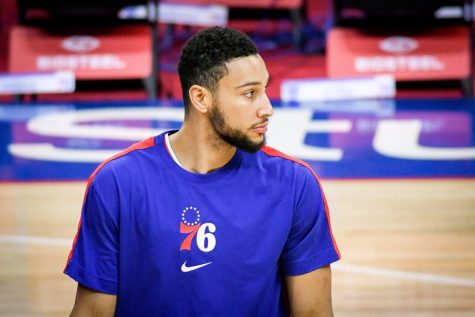 As training camp came along, Ben Simmons was nowhere to be found. He finally reported after the Sixers fined him $375,000 for a week. On his 2nd day back he was set to meet with the Media.  ESPN’s senior insider Adrian Wojnarowski reported that “Doc Rivers threw Ben out of practice”, Woj also said that, “Simmons was tossed early in practice, essentially for a refusal to participate in the next stage of the session.” Joel Embiid was interviewed about the situation after practice and said,  “Our job is not to babysit anybody.”

Simmons then claimed that something was wrong mentally and was able to be away from the team without a fine as long as he’s getting medical care from the Sixers. Quakertown High School student and Philadelphia 76ers fan Will Robinson say, “I think it’s best for both sides to move on, both sides have treated the situation very poorly. Ben Simmons has refused to play which is bad on his end and the Sixers have continuously harassed him with fines and the Philly fans definitely aren’t helping which is (allegedly) contributing to his mental health issues.”

Many think that this is a bluff from Simmons. It is obvious that Simmons never wants to play for Philadelphia again. He can claim that he has a mental illness and not show up to the team and still get paid. Ben refuses to get medical help from the Sixers, which has led to him receiving more fines. If he was really mentally wrong, he would receive help from the Sixers whatever way he can and avoid getting fined, while also trying to get help. Simmons’ reluctance to get help from the team leads basketball fans to believe he is faking mental illness – which would be an awful look for Ben since many people are actually struggling with mental health.

Outside of the Simmons fiasco, the Sixers made a few under-the-radar moves. They signed veteran PF/C Georges Niang from Utah (42.5% from 3 in 2020). Niang’s sharpshooting can provide Philadelphia with some spacing while also providing good defense. Philadelphia also signed former all-star C Andre Drummond to a veteran’s minimum contract to backup Joel Embiid. Philadelphia should definitely be a playoff team in the 2021-22 NBA season despite the Eastern Conference getting much better.

The 2021 NBA offseason was an abnormal one. It started in late July as opposed to the usual mid-June, the free agency opened up in August, as opposed to late June, and playoff teams had less than a 3-month offseason. Despite all of the circumstances brought about by the COVID-19 pandemic, the NBA offseason remained crazy.