School Lunches: Edible or Not? 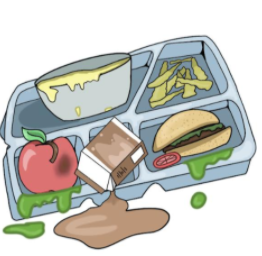 Food is a very important resource as it gives all living things the nutrients they need to keep themselves from dying, and for people, it’s also a form of pleasure. Let’s face it, people like good food. Whether that be junk food that could give you a heart attack in four years or quality food like steak and lobster, food is something that can take someone’s awful day and make it somewhat better. So why is it that school food is comparable in looks to the quality of prison food? From soggy pizza to undercooked burgers, school food has been the butt of jokes for years and it doesn’t seem to be getting any better.

The supplier of food for Quakertown Community High School is a company called Chartwells. Chartwells is a subsidiary of the North American branch of Compass Group PLC, a British multinational foodservice corporation based in Chertsey, England. On their official website, the company explains that their food is meant to be both healthy and delicious. They build their reputation around the idea that the student comes first when it comes to food and in their own

words, “Our goal every day is to make sure that students leave the cafeteria happier and healthier than when they came in.” Yet this is just a beautiful textbook example of blatant irony. The food they make doesn’t make most students happier than before they ate it and in some cases, it can be worse than some unhealthy foods.

Take the pizza for example. According to Quakertown Community High School’s lunch menu, a slice of school pepperoni pizza is 390 calories. Compare that to a slice of Papa John’s extra-large pepperoni pizza, much bigger in size than the schools, which is only 330 calories as stated in the nutrients section of their website. This is part of the irony because Papa John’s really isn’t the healthiest food one could eat and yet a slice of their extra-large pizza has fewer calories than food that is supposed to be nutritious.

Another major issue is the fact that students have to take a fruit or vegetable with their meal. This may seem perfectly fine at first as it allows for students to get access to healthier foods they may not eat or buy otherwise. But in actuality, the idea falls flat on its face since many students will take a fruit or vegetable purely so they can get their meal and not because they want to have more healthy foods in their diet. This leads to more food being wasted, a lot of it ending up in the trash without being eaten.

But besides the problems stated above, what do the students think of the school lunches? For this article, a survey was conducted to see what students thought about the food. One of the questions was about the portion sizes for the meals and whether they are filling or not. Out of the forty-nine students who responded, 87.8% stated that the meals do not keep them full for the day.

Only 2% of the students thought the food was a 5 while 4.1% thought it was a 4. These results show just how poorly received the food is by students, but wait, there’s more!

In the survey, students were given the opportunity to express their complaints about other issues with the food, especially when it came to quality. One issue that was brought up was about how on a few occasions, milk that was being served had expired, with one student complaining that there was “black stuff around the rim inside.” Another problem students had with the food involved the pizza which was described as either being burnt or extremely greasy, which may be the reason for all of those unnecessary calories.

Other problems mentioned by students include moldy cheese, stations appearing to be unsanitary, and even under or over-cooked food. Some students even noticed that the burgers they were eating were pink on the inside. A few of the responses addressed the small portion sizes with one of the students who responded saying that they played two sports for the school and that

they were starving by the time they had to go to practice. This survey, however, was not the only place where students showed their problems of school lunches, several taking their own lunch horror stories to Instagram via the “qtown.lunches” account. Although some of the pictures were faked, there are numerous that are real that perfectly illustrate the quality of the food.

It should be stated that it isn’t the cafeteria staff’s fault that the food is terrible. After all, they’re given bottom-of-the-barrel ingredients to work with and they do try their best. Lunch ladies have little to no control over what they serve to their students. Most schools/districts have “lunch planners” who plan out what the cafeteria workers must serve to the students each day. The friendly, underpaid cafeteria workers are not at fault for the less-than-desired meal choices, food quality, and portion sizes; rather, the district is.

However, that doesn’t completely change the students’ opinions of the food. There are solutions to the problem of poor school lunches, such as better portion sizes or ending the school’s contract with Chartwells and finding a better provider. However, any solution will still have its sacrifices. Better portion sizes could raise the price of school lunches, especially when talking about food on a public school budget. Cutting their contract with Chartwells wouldn’t be an easy option either as it would still take a long period of

time before the school district could find a new provider.

But despite these sacrifices, better school lunches should be a goal that any school district should look to achieve, let alone Quakertown. It’s most reasonable to think that if parents saw what the school was feeding their children, they too would be complaining about how awful the quality is. It’s one thing to cut costs during times of economic crisis, however, the food that is needed to help a student get through the day should at least have some quality to it. Maybe there will be a day where the pizza at Quakertown will have some sauce on it or the quality of the food won’t be comparable to that of gas station sushi.