Kapler’s Future in Philadelphia: If not 2019, when? 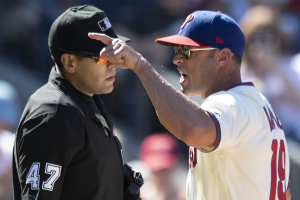 Gabe Kapler’s future as the manager of the Philadelphia Phillies appears to be in jeopardy.  Following a disappointing home stand against two of the league’s most talented rosters (Atlanta Braves and Boston Red Sox); the fans can nearly declare the team out of the Wild Card discussion this year, ending their anticipated playoff hopes. Bob Brookover of the Philadelphia Inquirer cites their poor home record after the All-Star Break (16-18) as the reason for their being “pretenders rather than contenders” despite resting only two games back of Chicago just a week ago.

The public opinion appears to point towards Kapler as the source of the team’s disappointing finish, having missed the playoffs two years in a row in which the team was expected to make a legitimate run. After having looked through mentions of Kapler on Twitter after some brutal losses, the overwhelming majority of fans look to Kapler as the man who needs a change of scenery.

Matt Klentak (general manager of the organization) and the rest of the front office have poured money into the free agent and trade markets this year, with fans’ preseason expectations at their highest since the Phillies’ last playoff run in 2011. Although many fans point to the players’ respective struggles, the Philadelphia fan base view Kapler as the issue.

If 2019 is not the year for the Phillies, when will it come? Their farm system holds mildly promising prospects at best, with many not panning out to their projections, and their financial stability lies within newly acquired Bryce Harper, Jean Segura, and others with hefty contracts. Injuries plagued the team, especially affecting the bullpen, but the front office planned for the team to hold depth and reassert themselves in the playoffs.

The NL East, projected as a four-team race besides the Marlins, ended up as a runaway for the Braves again, as the Phillies continued their in-division struggles with a record of 32-33 against the NL East.

Some days, the Phillies appear unstoppable, such as their swift three-game sweep of the Cubs at home in mid-August capped off by a Harper walk-off grand slam. However, they can look as pitiful as the worst 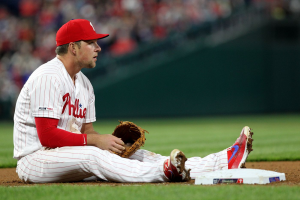 teams in the league, going up by 7 against the Marlins and losing by 8 with a final score of 11-19 on August 23. USA Today/AP points out that the loss was the “first time the Phillies have blown a 7-0 lead since August 2003” in Montreal when they led 8-0, highlighting the rarity of the team’s breakdown.

As a fan with realistic views, the Phillies will not contend for the next three or four years with the trends, they have faced, paired with an up-and-coming young Braves team that seems to improve year after year. The Mets and Nationals, if they continue their second half success into next year, they will only impede the Phillies in the face of a playoff run.

Philly sports fans, used to teams with extreme peaks and valleys, root for some teams that win the Superbowl and other teams that rest at the bottom of the division, so this year represents nothing new, except it just stings more this time. As the phrase goes, there is always next year… right?